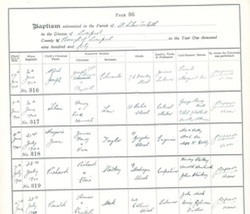 Richard Starkey was born on the 7th July 1940, the only child of Richard and Elsie, who where living at no9 Madryn Street, Dingle, Liverpool.

Shortly after the birth baby Ritchie was baptised at St Silas Church of England Church, High Park Street the date of his baptism was the 28th July 1940.

St Silas Church baptism register show Richard Starkey's baptism lines.
Ritchie's Dad, Richard was employed as a baker at the time of Ritchie's birth, with the country at war and the rationing that was to follow, the Starkey's were never short of sugar which made them really popular in there street.

Ritchie's early childhood was set, to the back drop of war, with Liverpool being heavily bombed, and at the age of 3 years his father Richard left home, leaving Elsie to bring up the baby, but fortunately for Elsie her Mother - in - law and Father - in - law, who lived in the same Madryn Street stood by her and where on hand to help her bring up Ritchie.

As Ritchie was getting older he attended St Silas School, by this time he and his mum had moved out of Madryn Street to Admiral Grove which was across High Park Street, to make ends meet as a single mother Elsie would take many casual jobs, including working as a barmaid at the Empress pub which was on the corner of the road where they lived.

for the young Ritchie he was a poorly child who had to spend a lot of time in hospitals, it was during one of his visits to the children's hospital that he found his love of drums, but the knock on effect of this was that while he was in hospital he missed a lot of his schooling.

When it was time for him to leave school he left with no qualifications, and after a few deadend jobs he got himself a steady job in the Speke district of Liverpool at H.Hunts, it was there that he joined his first band, known as the Eddie Clayton Skiffle Group, playing drums during lunch breaks.


Now that Ritchie had his own drum kit, and had a gig at the Cavern Club with the Skiffle group, he was becoming more well known and in 1959 left Eddie Clayton Skiffle Group to join The Dark Town Skiffle group, after which he joined the Raving Texans with Alan Caldwell, it was around this time that Ritchie became known as Ringo Starr, and Alan Caldwell called himself Rory Storm, at the end of 1959 Skiffle was on the way out, so Ringo and Rory re-named the Raving Texans to the new name of Rory Storm and The Hurricanes.

At the beginning of the 60's Rory Storm and the Hurricanes had established themselves as the top group in Liverpool, but a new band was coming through to challenge the top stop, that was The Beatles, with John, Paul, George and Pete Best, the rivalry between the group was always friendly as they would meet each other at gigs around the north west of England and while touring in Hamburg.

At that time Ringo was still with Rory Storm who where in Butlins, Skegness doing a summer season, Ringo said he will join the Beatles within a few days to give Rory a chance to get a new drummer.

This was reported in the music magazine MerseyBeat, but it wasn't that much of a headline, it was a small article on page 10 in the September 6th - 20th, 1962, edition which read as follows: